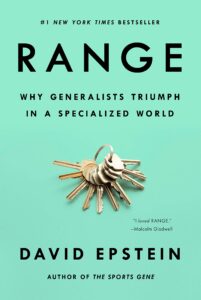 I love to read.  My love of reading led to my authoring my first children’s book; Dentists Are Monsters  (available on Amazon or direct through our office).   I thought I would share my thoughts on some of my favorite books.  This month I review Range.

Before I do that, let me share a few photos of class room visits I’ve made this month.  Contact me if you would like to arrange a visit.

Although I love what I do, I admit that I have interests outside of dentistry. I enjoy writing, visiting art museums, and running, among other things. Shouldn’t I just concentrate on dentistry?  Malcolm Gladwell would suggest that I need to focus on getting my 10,000 hours of practice to be any good at dentistry.  If practice makes perfect, why should I do anything other than dentistry?

First of all, my wife Erica may object.  We have only been married a year and she still likes to spend time with me.  Secondly, life would be boring!

So, what does David Epstein have to say?

Ah, good, he thinks we need some diversity in our lives.  He challenges this notion that repetition and specialization is the only way to achieve success. In his book, Range, Epstein makes the argument that generalists, not specialists, are the ones primed for success. He makes the case that professionals who cross domains and have range are more likely to thrive.

Epstein begins with a couple of stories. This first one, you probably know well.  See if you can guess who these athletes are:

The boy’s father could tell something was different. At six months old, the boy could balance on his father’s palm as he walked through their home. At 10 months he could climb down from his high chair, trundle over to a golf club that had been cut down to size and imitate the swing he’d been watching in the garage. At two—an age when physical developmental milestones include “kicks a ball” and “stands on tiptoe”—he went on national television and used a shoulder-height club to drive a ball past an admiring Bob Hope. That same year he entered his first tournament and won the 10-and-under division.

At eight, the son beat his father for the first time. The father didn’t mind, because he was convinced that his boy was singularly talented, and that he was uniquely equipped to help him. The boy was already famous by the time he reached Stanford, and soon his father opened up about his importance. His son would have a larger impact than Nelson Mandela, than Gandhi, than Buddha, he insisted. “He has a larger forum than any of them,” he said. “I don’t know yet exactly what form this will take. But he is the Chosen One.”

This second story, you also probably know. You might not recognize it at first.

His mom was a coach, but she never coached him. He would kick a ball around with her when he learned to walk. As a boy, he played squash with his father on Sundays. He dabbled in skiing, wrestling, swimming and skateboarding. He played basketball, handball, tennis, table tennis, and soccer at school. “I was always very much more interested if a ball was involved,” he would say.

Though his mother taught tennis, she decided against working with him. “He would have just upset me anyway,” she said. “He tried out every strange stroke and certainly never returned a ball normally. That is simply no fun for a mother.” Rather than pushy, a Sports Illustrated writer would observe that his parents were “pully.” Nearing his teens, the boy began to gravitate more toward tennis, and “if they nudged him at all, it was to stop taking tennis so seriously.”

As a teenager, he became good enough to warrant an interview with the local newspaper. His mother was appalled to read that, when asked what he would buy with a hypothetical first paycheck from tennis, her son answered, “a Mercedes.” She was relieved when the reporter let her listen to a recording of the interview. There’d been a mistake: The boy had said “mehr CDs,” in Swiss German. He simply wanted “more CDs.”

The boy was competitive, no doubt. But when his tennis instructors decided to move him up to a group with older players, he asked to move back so he could stay with his friends. After all, part of the fun was hanging around after his lessons.

By the time he finally gave up other sports to focus on tennis, other kids had long since been working with strength coaches, sports psychologists and nutritionists. But it didn’t seem to hamper his development. In his mid-30s, an age by which even legendary players are typically retired, he would still be ranked No. 1 in the world.

If you have not guessed, these are the stories of Tiger Woods and Roger Federer.  Two athletes who have achieved success by completely different paths.

“Generalists often ﬁnd their path late, and they juggle many interests rather than focusing on one. They’re also more creative, more agile, and able to make connections their more specialized peers can’t see.”

For those looking for a great non-ﬁction book, I highly recommend Range by David Epstein. It gives hope to all of us who have ever struggled, changed careers, or have interests outside of our immediate ﬁeld.

At Markiewicz Dental of Mundelein, we offer a diverse range of dental services. We provide comprehensive adult dentistry and children’s dentistry.   Whether you need a dental cleaning, crowns, root canal, implant, cosmetic dentistry, filling, or denture, we deliver exceptional patient experiences each and every time you visit our office.  What sets us apart is our superior team.  Contact us for an appointment or questions.

We recognize that emergencies do occur. Our office phone number is answered 24 hours a day by a voicemail system informing you of how to reach the doctor on call. If one of our doctors is unavailable, you will be given instruction on how to reach the dentist covering emergencies for Markiewicz Dental. We provide special priority status for you or any family member who has been seen during the previous year in our practice.

Our team members are well trained and dedicated to make a difference for each and every person we are privileged to serve. No question is too small or insignificant for us to answer. Please give us feedback as your opinions and ideas are very important to us.

Contact us to get started at the Markiewicz Dental. We look forward to meeting you and helping you achieve a beautiful and healthy smile.

Accessibility by WAH
Call Us Text Us